It happened on April 23, 1973.  Forty two years ago today Dee and I had our first date.  We refer to it as “the deal”.  We’ve had many dates since that day but never another one just like the first one.  I’ll explain in a minute. 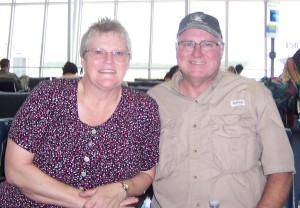 I thought about that first date Tuesday night.  We had tickets to attend a classical piano concert at the Bob Bullock State History Museum in beautiful uptown Austin, Texas near the University of Texas campus.  The concert was part of the Texas Art and Culture Series.  Renowned Texas pianist and director of the Round Top Festival Institute James Dick performed.  Dick is a graduate of the University, winner of the Texas Medal of Arts, the Chevalier des Arts et Letters, and an Honorary Associate of London’s Royal Academy of Music.  He played several classical pieces from French composers in honor of the Museum’s new La Belle exhibit.  Dee and I particularly enjoyed the pieces composed by Claude Debussy.

Earlier in the evening we took advantage of our museum membership, parked in the parking garage and walked to dinner.  El Mercado provided the perfect fix for a couple who had a taste for Tex-Mex.  After dinner we strolled by beautiful old homes and gardens in the early cool of the evening.  We eventually found ourselves seated under the giant Star of Texas in front of the museum, talking while waiting to go inside.  I think she mentioned the approaching anniversary of our first date and it raised a question in my mind.  How many times had I taken her to a classical music concert?  She said this would be the first.  Surprised, I asked if she were sure.  (I think our memories are a little faulty these days.)  But I agreed it could have been me and the girls at those Stephen F. Austin concerts.  (No, wait a minute, I’m sure our whole family went to at least once.)  Well, it’s a good thing her favorite music’s not classical!

I thought about how much I enjoyed our conversation and how much I always do.  We spend more time together now than we ever have and would not want it any other way.   We enjoy being together and never have to force ourselves to find something about which to talk.  I’m glad.

Now about that first date.

I was a senior in high school in Denton, Texas.  Dee was a freshman at Texas Women’s University.  We met through friends at church.  I never really gave her much thought because she was “so much” older than me.  But one night she pulled me aside at the

Christian Student Center and asked if she could ask my advice.  That conversation, hearing her heart, opened my heart to hers that night and boy did I take notice!  About two weeks later, while working on a class project, I decided to use it as an excuse to ask her out.  I told her I would make a deal with her.  Help me on my project and I’ll take you out for pizza.  I’ve been asking her ever since and she’s been saying, “Yes”.  But, I’ve never asked her to help me on a high school project.  That was a one of a kind date.

We saw each other almost every day for four months and then I was off to school.  We would spend very little time together the next two years.  We were both very busy.  We “dated” long distance which I think helped my grades but wasn’t nearly as much fun.

Less than a week after my 20th birthday and at a time of the year when we were the same age, we were married.  It hasn’t always been easy or fun but it’s been a lot more fun than it’s been uneasy.  I think we would start it all over again today.  Who knows, with a little bit of experience, it could be even better.

Now, you’re wondering, why this story?  Why all the detail?  Well it’s like this.  As a family historian I’m sure some of you have regretted not asking you grandparents more questions or listening to their long-winded details?  My hope is that when one of my grandchildren ask the questions, I wonder where Pop and Memaw met or I wonder what they did on their first date, they will find this firsthand account.  What I would give for some firsthand accounts.  How about you?