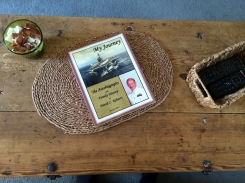 David Lee Roberts did something many of us talk about – but most of us never get around to doing.  He wrote his life story.  He put it all down in a book.  And, he has a PDF version on disc.  (Available for my children)

David is a decorated Navy veteran.  He served 27 years active duty and 3 years reserve for a total of 30 years service to the United States.  He has now “retired” to serve as a patrol officer at Dallas-Fort Worth International Airport.  He and his wife Cheryl live in Keller, Texas and have three grown children with growing families of their own.  Daughter Amy and her husband Matt serve overseas in Dubai.   Son Bryan, now retired from the Air Force, is launching a second “tour of duty” in the ministry.  He and his wife Lori are presently in seminary in the St. Louis area.  Son Matthew also serves as a DFW patrol officer.  He, his wife Mandy and their children live in Keller, Texas.  David and Cheryl’s children and their children’s children will enjoy this book for generations to come.  It will be a family treasure.

David’s my older brother of whom I am rightfully proud.  God has been good to both of us and given us wives “way above our pay grades”.  I remember wondering when David went off to basic training in 1971 (Uncle Sam would finish raising him) what would happen to him.  He seemed so lost and adrift on life’s sea.  Well, God and Cheryl are what happened to him and I know for a fact he’s grateful.  He writes about it in his book!

David’s first duty station out of air traffic control school was the Naval Air Station in Kingsville, Texas.  My dad and I visited him there on my 16th birthday.  I enjoyed watching him work and hone his tower skills.  It wasn’t my first time in a control tower.  Our uncle Ralph Reed retired from the FAA.  He used to allow us in the control towers when we were just little squirts.  Watching David work in the same environment, I began to think of him as a “traffic cop” for pilots.  Much later in his career as Senior Chief on base at Meridian Air Station in Mississippi, he would serve as the traffic judge for the entire base.  I tell him now he’s just a cop.

Thanks David for the treasure you have given our family.